Historian Marc Dollinger is on a quest to analyze Jewish complicity in racism.

(RNS) — In the days following the death of George Floyd, Marc Dollinger was suddenly in demand everywhere.

In addition to teaching classes at San Francisco State University where he is full professor, the blond-haired historian of U.S. Judaism was suddenly sought after for his insights on the racial reckoning happening across the country and the role American Jews play in it.

In the middle of a pandemic and amid an intensity that hasn’t let up, Dollinger parked himself in front of his home computer and hasn’t left.

Since May, the 56-year-old professor has led 80 Zoom lectures and workshops, speaking to synagogue groups, college students and interfaith leaders. He’s been invited to talks at Jewish community centers, historical societies and book clubs. He was interviewed by the NFL and by CNN’s Don Lemon. He spoke to German public radio and to a Mormon-Jewish dialogue group.

The subject, as always, is Jews and race, or, more specifically, whether white U.S. Jews share the blame for America’s racial injustices. These are weighty themes, and he expounds on them with a ready smile and a folksy demeanor.

The nation’s racial reckoning has challenged his own biases, but in this age of polarization, Dollinger remains that rare public scholar who owns up to his own biases with disarming candor. 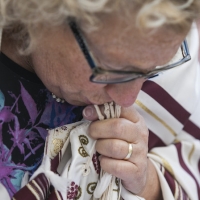